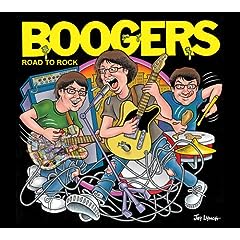 Putting together a kids’ version of a band whose music celebrated eternal adolescence might seem like a rather pointless thing to do, but don’t be so quick to write off the Boogers — as it turns out, making Ramones-inspired music for grade schoolers is a pretty good idea, and Road to Rock (patterned, from the cover on down, after Road to Ruin) is a lot of fun.

Now, having said that, I have to add that I’m not really sure who the audience is for this stuff, or if there even is one. Musically, Road to Rock has all the attitude you’d expect from a band that bills itself as “the anti-Barney” and “the Wiggles’ worst nightmare,” and packs 20 songs into its brief 26-minute runtime, but lyrically, it’s mostly made up of nursery rhymes, which creates a bit of a riddle — how many kids are old enough to get excited about punk, but young enough to put up with even the most rockin’ version of “Twinkle Twinkle Little Star”?

The answer, I’d wager, is “not many,” although the Boogers seem to be doing pretty well for themselves, and I’m not ashamed to admit I got a kick out of listening to Road to Rock. I’d suggest these songs for vintage t-shirt-wearing boys and girls between first and fourth grades — sort of a narrow demographic, I guess, but why look an anti-Barney in the mouth? Crank it up, teach your toddlers how to make devil horns with their adorable little fingers, and get ready for them to raid your collection of the real stuff in a few years.