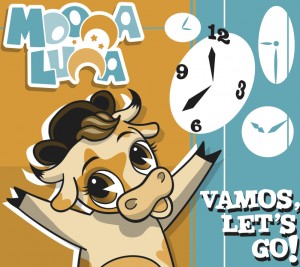 CD: Vamos, Let’s Go!
Artist: Moona Luna
Audience: Speakers of English. Speakers of Spanish. Don’t understand either? You can listen too!
Sounds like: The best mix of Latin music and kid’s tunes you will hear. (editor’s note: Phil – also check out Lucky Diaz & Ozokidz)
Buy from: Amazon.com, iTunes, CD Baby
Random Thought: There is only one man in the moon, but there are two men in Moona Luna.
Tweet Sized Review: My Spanish is very weak, but it doesn’t matter when a CD like this comes around.

I have been called a music snob by many a person. I take offense to this because I think I like WAY more music than the normal person, but that is a different argument for a different time. Even if I am a music snob, I can’t find anything to not like about this album.

I had never heard Moona Luna before getting my hands on Vamos, Let’s Go!. Since I’ve had a chance to listen to this album over and over again, I can tell you that I’m going to make sure to get the first release from this New York based group.

In my last review I talked about how that group did a great job of mixing styles. I’m not saying that Moona Luna does it better or worse, but they do a fantastic job of making songs sound unique while still sticking to their Latin roots.

I absolutely love the first track, which also happens to be the title track, “Vamos, Let’s Go!”. The first time it started playing I thought I had made a mistake and clicked on a Los Straightjackets or 3rd Wave Ska track. It has such a happy and upbeat “surfer” feel to it. Plus, accordion!

Once the second track hit I thought my iTunes had randomly shuffled to something that would have been heard on the jukebox in a 50’s ice cream shop. After listening I realized it was still Moona Luna! I said to myself, “Well this is a cool track. It’s like something from “Grease” but good and appropriate for children!” I couldn’t wait for the rest of the tracks to play.

Once the third track of this album rolls, Moona Luna really hits their stride. The first two tracks are really good, but I think the remaining are really in their wheelhouse. Not only are they in their wheelhouse, but they knock them out of the park. No swinging and missing here. I’m not going to talk about each and every track (we would be here awhile), but the fifth track, “What Time Is It? (Que Hora Es?)” is a laid back track that I find myself either singing or whistling all the time. I’m pretty sure my coworkers are ready to tell me what time it is.

Track seven, “One of Those Days (Uno De Esos Dias)” not only has very relatable lyrics, but a tango beat that will have you dancing across the room. Track nine, “All The Time (Todo El Tiempo)” made this rude boy flash back to good memories with the upbeat guitar strumming and fun accordion licks (it seems as if our fearless leader has me pegged on what music to review).

The final track, “Beautiful Birthday (Cumpleanos Feliz)” is a very strong end to the album. It is not only a track that is probably going to be played at some point during my daughter’s birthday just based on the title and because I love her, but it is bright, peppy, and just downright fun.

I didn’t even get to the most important part yet. In the constant struggle to find music that is appropriate for the entire family, you don’t want to settle for low hanging fruit. Not only does every song contain both English and Spanish lyrics, but there is repetition in each song. Well, at least from my poor Spanish skills there seems to be. If a word that is repeated throughout the song is said in English, there is a good chance it is said in Spanish as well. Those of us that work with kids know that repetition does work. It works even better when it is presented in a fun format. This album is way more than a fun format.

We know that a child’s best chance to learn a foreign language is start them early. I can’t think of a better way to introduce them to Spanish. If I can learn and remember some basic Spanish just by listening to this album, I have no doubt your child will as well. Do everyone a favor and turn off the Maroon 5 (no seriously, please stop) and play Vamos, Let’s Go! instead.

Don’t believe the review? Listen for yourself.