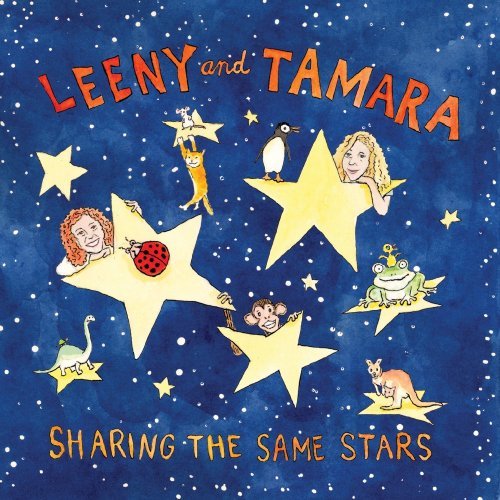 Stars boasts some sharp production (and instrumental work) from Art Hays, who gives these songs a more layered, fleshed-out feel than their predecessors — and the songs themselves are a little more advanced, too: For example, instead of dealing with the effects of soiling one’s diaper (Be Nice‘s “Stinky Diaper”), we get a number about having to hold it long enough to get to a bathroom (the appropriately titled “Hold It”). Just a little more grown up, though; Be Nice hearkened back to the simple, homespun pleasures of the kids’ music of yesteryear, and Stars covers similar lyrical ground. Some children’s albums try to appeal to adults and pre-teens as strongly as younger kids, but Leeny and Tamara are pretty much all about the tykes. There’s nothing wrong with that, it’s just something you should know before you pop Sharing the Same Stars into the family CD player.

If their focus is narrow, their talents run deep. I enjoyed Be Nice, but I really think Sharing the Same Stars is a tremendous leap forward. The album opens with the jazzy strains of “Put on My Seatbelt” and segues into the Beach Boys-ish pop crunch of “Taking Turns,” a terrific one-two punch that sets the wonderfully catchy tone for the rest of the disc. Leeny and Tamara trade lead vocals, and they’re both gifted with bright, clear voices that fit these sunny tunes perfectly, while Hays does a tremendous job of turning a pile of overdubs into something that sounds like the work of a room full of ace session players. The songs are both educational (“My Baby” runs through the names for different species’ young; “Your Epidermis Is Showing” is a two-and-a-half minute skin gag; “Vitamin C” is…well, you get the idea) and uplifting (“Little Sister” addresses sibling conflicts; “It’s Cool to Be You” reinforces positive differences), which is pretty much the main thing you’re looking for in this type of album.

If Sharing the Same Stars has a real problem, it’s that, at 14 songs, it’s too long. Very few albums need to have more than ten songs, and perhaps not coincidentally, I felt like Stars started to run out of gas around the 10th track. Of course, kids tend to latch onto music pretty fervently, and if you end up having Stars jammed into your car stereo for weeks on end, you’ll probably be grateful that it’s long enough to keep you from having to hear the same song more than once during a short trip — but by any other measure, it would have benefited from more stringent editing. Still, it’s hard to argue with too much of a good thing — and for parents of children young enough to appreciate punny songs like “Dinah Sore Loser,” this is a very good thing indeed.