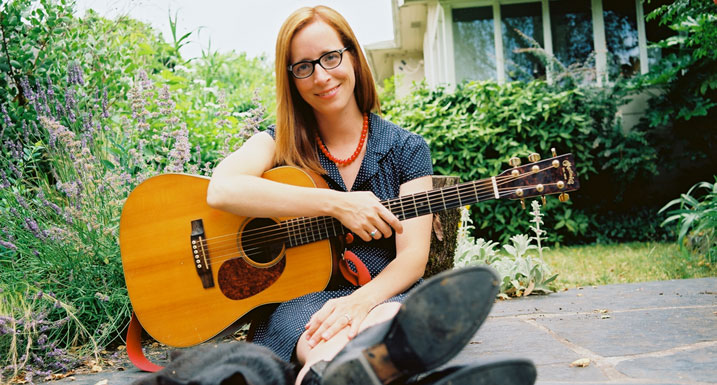 The family entertainment market is so saturated with artists venturing over from the “grown-up” music world that I’m not sure there’s any such thing as an unexpected candidate for a kindie record anymore — but having said that, I have to confess I raised my eyebrows when I found out about Tumble Bee: Laura Veirs Sings Folk Songs for Children.

Part of the young, Pitchfork-approved crop of neo-folk artists who have helped breathe fresh life into the traditional music scene over the last decade, Laura Veirs is actually a perfect fit for a record like Tumble Bee, which sits public domain favorites like “King Kong Kitchie Kitchie Ki-Me-O” and “Jack Can I Ride” alongside newer family-friendly numbers like “Jamaica Farewell” and “All the Pretty Little Horses.” The warm fragility of Veirs’ voice has often acted as a softening agent in albums like Year of Meteors, which add icy textures and hard angles to folk forms, but here, it’s cut from the same weathered cloth as the music.

I love Tumble Bee, in other words, and I think your kids will too. Veirs offered her perspective on the album during our recent conversation — here’s what we talked about.

One of the big differences between the kindie scene and the broader pop marketplace is the way covers albums are received. Outside this little bubble, they’re usually something an artist does to fill out a contract or kill time between new material, but it’s still a really vital tradition for family artists.

You know, I can tell there’s a stigma attached to this record already, with friends of mine who don’t have children. Their eyes will glaze over and they’ll be like, “What else is going on?” There’s definitely a divide there. And in doing our research for this, I felt the bar…you know, there’s mediocre music everywhere, in every style, but I think the bar is often set lower for children’s music. Or it’s just aimed at really young children, so it isn’t as interesting to adults. In fact, it can be annoying.

So I’d say those friends are probably thinking I went and made one of those goo-goo, ga-ga records, but I didn’t. I wanted to make something parents could enjoy with their children — or without them, really, but maybe that’s too much to ask. It’s really more of a covers record than a kids’ record. I think a song like “Prairie Lullaby” is strong enough to capture anyone’s attention.

We tried to do these songs in our own way, but we realized some of them have been around for 500 years. I can see how some people would say, “Oh, I’ve heard this.” But not all of them — some songs were technically traditional, but we found them in places like Peggy Seeger’s Animal Folksongs for Children — so we were familiar with the words, but had maybe never heard them in those arrangements. Just from a folklore perspective, doing that research was a lot of fun.

You’ve been pretty prolific as a songwriter so far. What made you want to take this detour into covers now?

Well, I have an 18-month-old, and when I was pregnant I toured with him — both in the womb, and after he’d been born. So after that was done, I felt like I needed to catch up on sleep [laughs], and I’d also made the choice to cut back to part-time music. I’d block out four-hour days in the backyard studio, and that’s how we made this album — four hours at a time, which took awhile.

So there was that reason. I felt like I’d just created this human being, and toured my ass off, and I needed to recover myself in some way and just relax with music. I enjoy songwriting, but in some ways, it’s much harder work. I didn’t feel like I quite had the juice for that.

You spent some time in China when you were younger. Did that affect your relationship with American folk music at all?

Well, that was a long time ago, and although I was obsessed with learning Chinese, I never really became enmeshed in the culture, so to speak. If anything, I think it was more a question of having a lot of Buddhists in my family, and I’m not a religious person, per se, but there’s something about that philosophy that appeals to me as a musician. I like music that has a lot of space, and that toys with the fantastical surrealist aspects of life, and I think there are interesting parallels there.

If being outside the U.S. has affected my relationship with American music, I think it’s probably happened because I’ve toured Europe a lot — I’ve really dedicated a lot of time over there, and gotten a lot of really positive feedback because of it. I hear their perspective on America while I’m there, and how a lot of them are horrified by things like healthcare, the military, the school system — but they’re fascinated by our music, and our overall culture. And they should be, because it’s awesome. African-American rhythms, Irish melodies, the birth of rock ‘n’ roll — they don’t have that melting pot.

And we also have these vast wildernesses, these huge untouched tracts of land. I grew up doing a lot of camping with my family, and I think that has probably had a bigger influence on my music, as well as my lyrics.

What was your research process like when it came time to decide which songs you were going to cover on the album?

We listened to the whole Harry Smith folk anthology, which we’d done before, but never with something like this in mind. We listened to a lot of Neil Young, which didn’t make it onto the record, as well as a lot of friends of ours — like Karl Blau, who wrote the title track. Harry Belafonte was a biggie, as well as Peggy Seeger, Woody Guthrie, Pete Seeger…you know. My husband has a ton of albums — he’s obsessed. Sometimes I felt overwhelmed, so he did the bulk of the searching.

You did a stint on a major label (Nonesuch), and now you’re releasing albums independently again. Is Tumble Bee part of an overall plan, or are you just taking things as they come?

I run my label with my friend now, which has been great. I mean, I’m so grateful to Nonesuch for giving me a springboard into bigger budgets and real promotion, because I had no audience in this country when I signed with them. But financially speaking, it’s much better to have my own label. It was a risk — it might not have worked out that way, but it has.

We’re just going to run this label, hopefully put out some other artists’ music, and I’ll make another album. I’m working on that now. I may make another record for kids at some point — I think it’s been super fun, stigmas aside. Hopefully, I can add to the perception that this kind of thing can be as artistic and valuable as any other kind of album.