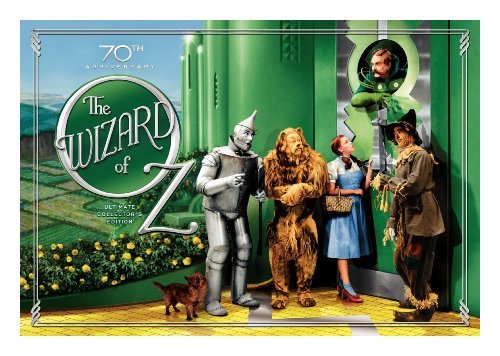 It’s the most-watched film in history, and unless you’re an extremely unusual person, you’ve seen it more times than you can count — but The Wizard of Oz still somehow never loses its ability to enthrall audiences of all ages. I’m old enough to remember the days when Oz was an annual television tradition for the whole family; I can’t think of it without imagining Thanksgiving celebrations, and thanks to having three younger siblings and a mother who fell under the movie’s spell as a girl, I knew the movie inside and out by the time I was in high school. After my daughter was born, The Wizard of Oz — both the movie and the original L. Frank Baum book — was one of the first gifts she received from my mom, and although we worried that the Wicked Witch and the flying monkeys would freak Sophie out, we eventually caved in and let her watch the movie around her third birthday. Surprise, surprise — she loved it, and it’s become her own most-watched movie and favorite film.

Through her repeat viewings over the last year, I’ve rediscovered The Wizard of Oz myself (we’ve also read her the first 14 books in the series, but that’s another story). There aren’t many things that can hold up to seven decades of the kind of hype Oz has earned, but if there’s any such thing as a perfect movie, this is it — and if there’s a movie worth an incredibly lavish 70th anniversary box featuring books, a watch, and more than 16 hours of bonus material, it’s this one. END_OF_DOCUMENT_TOKEN_TO_BE_REPLACED