The Tinker Bell movies have been far more popular in our household, more so than any of the Disney princess movies. (Including Frozen. Seriously) At first I couldn’t quite pinpoint why. However, after the latest installment from the franchise, it clicked with me. The Tinker Bell movies don’t have the darkness and scary villains that are often found in other Disney movies.

That changed with Tinker Bell and the Legend of the NeverBeast.

Enter scary darkness into the Tinker Bell series. Uh-oh. Based on the cover and title of the movie alone, I knew I needed to do some prep work with our daughter before we watched this one. It took a week before she would even agree to watch it. Just when I thought I would be watching the movie alone, she cracked under the lure of Tinker Bell and Pixie Hollow.

Overall, the movie does not disappoint, there is plenty of colorful scenes, catchy music and laughs from Tink and her fairy friends. We were even introduced to a new set of fairies – the scout fairies – charged with protecting Pixie Hollow. Wait. Protection in Pixie Hollow? The glowing green eyes of the NeverBeast and the intense lightning storm are right out of a Marvel comic book movie. A little much for both of our daughters (5 & 2 yrs old). I’m envisioning 2 a.m. nightmares already.

All that said, the movie has a great message. The value of having an open heart and looking for the good in others enables you to make new friends and learn things from others that you never thought possible. At a very impressionable age when our daughter is surrounded by new experiences at school, it opened the door in a different way to talk about being misunderstood and that you shouldn’t make assumptions about someone based on what is on the outside – good or bad. You can miss great opportunities when you fall into this pattern.

As with most of the Disney movies, we loved the music and downloaded the songs several minutes after the movie was over and we’ve listened to it every day again and again … and again. (even more than ‘Let It Go’) And I don’t even mind. The music was written by one of the more underrated song writers around, Bleu. With the the help of KT Tunstall, the songs fit great within the movie, but would easily stand on their own outside of the film. Note: There is a DVD that comes with purchase at Wal-Mart titled “Making Music with Bleu.” We didn’t receive a review copy of it, but based on the songs written for the movie (and songs we’ve enjoyed by Bleu for years) I have no doubt that it is wonderful. 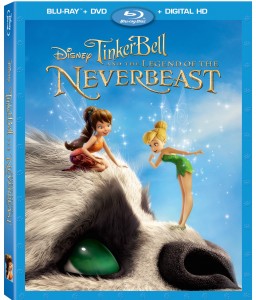