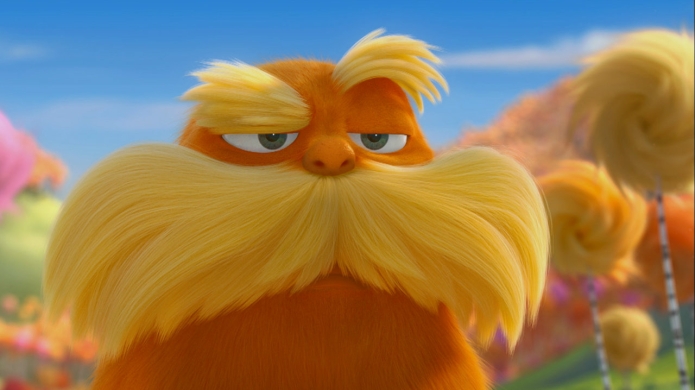 I took my kids to see The Lorax this afternoon, and it felt like a small act of defiance. This is what we’ve come to in 2012, when mainstream children’s entertainment is subject to ever-harsher scrutiny from all sides, and a well-made family film with a positive environmental message is lambasted by right-wing pundits while being assailed by grumpy bloggers and activist groups who find fault with its (admittedly dizzying) array of product tie-ins.

A pox on both their houses. Taken purely on its own merits, The Lorax is wholly enjoyable, a beautifully animated adaptation of the classic Seuss book that manages to pad out its source material’s length without stretching the narrative fabric too thin. Spring for a 3D showing, as I (inadvertently) did, and you’ll be treated to clear, seamless effects that take advantage of the technology while keeping the “HEY OH MY GOD IT LOOKS LIKE WE’RE IN YOUR FACE” moments to a minimum.

In fact, I’d argue that it represents something of an evolution for contemporary animation — it’s being sold as your average wacky quick-cut kiddie flick, with bright colors and gonzo gags, but The Lorax is really much more sedate than the commercials would have you believe, anchored by a surprisingly pensive performance from Danny DeVito, who plays the “furry peanut” who speaks for the trees. All things considered, I found it a sweeter, more sensible film than most of what Shrek hath wrought — and leagues better than the poorly animated pablum that my generation was given.

All of which makes me wonder why some of my esteemed colleagues are so steamed about The Lorax. As Ashley Albert said when I interviewed her a couple of months ago:

When I was a kid, I’d take out the ads in the paper long before the comics, and pore over the coupons to see what was coming out. I always loved that stuff. And I also understand that most television programming, in the most cynical view, is just there to fill space in between commercials. That’s really the point of programming, is to keep people watching until the commercials come on. If you want high-quality content, it needs that support.

You might think this is a cynical point of view for someone in the kindie entertainment business to express, but — aha! — it is a business, and if you’re anything like me, you probably remember doing exactly what Ashley describes in that quote. From Saturday morning commercials to the Christmas JCPenney catalog, we loved knowing what was coming out.

And you want to talk about product tie-ins? Most, if not all, of the cultural touchstones of our youth lived and died on corporate synergy. Pick something you loved from your childhood in the ’60s, ’70s, or ’80s, and chances are high that its rights holders tried to sell you several different flavors of product. Star Wars, E.T., The A-Team, Smurfs, Pac-Man, Super Mario Bros., Masters of the Universe…need I go on? Hell, even Journey had its own video game. Cartoons begat toy lines; toy lines begat cartoons; both begat (usually quite awful) films et cetera ad nauseam.

Did you own Sesame Street toys or records? Do you resent the Children’s Television Workshop now?

I submit that the dialogue surrounding children’s entertainment, while often pure of intent, may have started to eat its own tail. As cultural gatekeepers, we have it so much better than our parents did — not just in terms of the sheer objective quality (and quantity) of the stuff our kids have to choose from, but in so many other ways: the intelligence and malleability of our content delivery mechanisms, the technology that aids us in restricting it, the ease of research and worldwide parental dialogue surrounding it, and probably a few things I’d think to mention if I weren’t somewhat sleepy and a little buzzed.

Are tie-ins annoying? Sure. I’m willing to bet my parents rolled their eyes when McDonald’s sold Great Muppet Caper glasses. But those glasses didn’t impact the quality of the film, and my mom and dad had the option to say no, just like I do when we pass a Lorax display for detergent in the grocery store. As Ashley pointed out, entertainment comes at a cost. Jackie Gleason knew it when he shilled for Quality Drugs in 1950, Jimmy Fallon knew it when he thanked Budweiser for sponsoring Springsteen Week, and Universal knew it when they ponied up $70 million to adapt a 41-year-old book about protecting the environment. To pretend that the rules should be different for children’s entertainment, or that there’s some sort of objective line you can cross when using your product to help sell someone else’s product, is willfully naïve at best, snobbish at worst.

To boil it down to Seussian circular reasoning: The point is the story, and the story’s the point. Universal’s decision to pursue licensing deals with Seventh Generation or Mazda has nothing to do with the work done by the film’s directors, screenwriters, or voice cast, all of whom turned in performances vastly superior to almost anything targeted to my age group when we were young.

If you’re looking for a film to enjoy with your kids, approach The Lorax as a movie and nothing more: read the reviews and proceed accordingly. But if you’re just looking to reject another piece of corporate-funded mass media on principle, I’d suggest perhaps taking it down a notch. I’m not saying we’ve won the war over children’s entertainment, but I also don’t think it’s out of line to say the battlefield has changed quite a bit over the last 35 years. It might be time to abandon the foxhole mentality and adapt a more holistic approach. 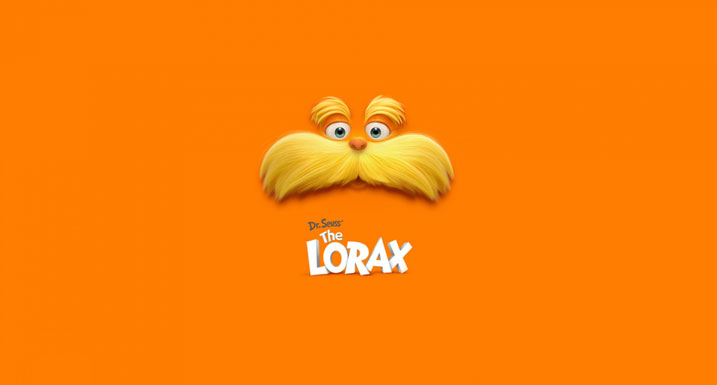 We’ve all earned the right to be skeptical anytime Hollywood decides to adapt one of Dr. Seuss’ books (curse you to an eternal grave of flaming rabbit turds, Tim Allen), but based on this new full-length trailer for The Lorax, it looks like we might actually have some Seussical entertainment to look forward to next year. (Even though — gasp! — they gave the Once-ler a face). Check it out below: