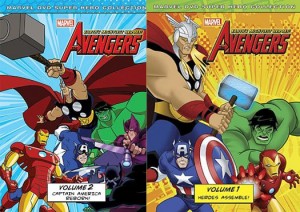 The Avengers: Earth’s Mightiest Heroes gets it right. This Disney/Marvel Comics animated series has the same well told, serialized storytelling you’ll find in the comic pages; excellent animation from Film Roman; lively performances by the voiceover cast; and a well blended mix of action and comedy. It even has a killer theme song (sung by some dude who sounds like James Hatfield of Metallica). The DVD’s for Volume 1 and Volume 2 are single discs sold separately and are the perfect introduction to the ongoing animated series, as well as the characters who will be featured in the Avengers live action film being released in the summer of 2012. END_OF_DOCUMENT_TOKEN_TO_BE_REPLACED