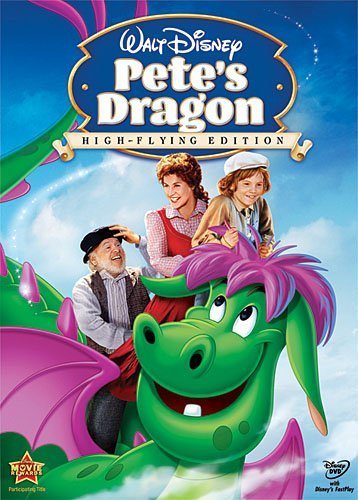 Released pretty much smack dab in the middle of Disney’s lost years, 1977’s Pete’s Dragon generally isn’t the first movie people tend to think of when they talk about the studio’s classics, and for good reason — though it was noteworthy at the time of its release as one of the few live-action/animation hybrids to grace the silver screen (1964’s Mary Poppins and 1971’s Bedknobs and Broomsticks used similar technology, but not as extensively or seamlessly), it was also the latest example of the distance Disney had drifted from its roots. Still, 1977 represented something of a miniature renaissance for the studio, at least in the context of the relatively barren ’70s; if you count The Many Adventures of Winnie the Pooh, a Frankenstein-style stitching of short features, three of the five features Disney released that year contained animation. Things had been worse (Superdad) and would get worse again (Condorman), and probably as a result, Pete’s Dragon has become a source of rather fond memories for the generation that grew up with it. END_OF_DOCUMENT_TOKEN_TO_BE_REPLACED