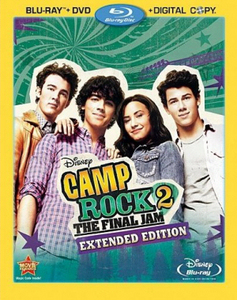 As if you need my opinion to tell you whether or not Camp Rock 2: The Final Jam- Extended Edition is worth your kids’ time. I’m sure they’re already clamoring to get the DVD after seeing the premiere on Disney Channel over Labor Day.  But guess what, this is one film that actually exceeds the original both in content, production value, and musical numbers. Whereas the original Camp Rock felt like a blatant attempt to ride the coattails of the High School Musical phenomenon, now that Demi Lovato and the Jonas Brothers are bigger stars than any of the HSM kids, Camp Rock 2: The Final Jam doesn’t need to be tied to HSM in order to succeed.

In the new film, Mitchie (Lovato) is eager to return to Camp Rock, the summer music camp where she came into her own, and meet up with the friends she made the previous summer. At the same time, music stars Shane, Nate and Jason (Joe, Nick and Kevin Jonas) are excited to get off the road and away to the camp. Shane, especially, wants to spend as much time with Mitchie, the girl he met when he was forced to work at Camp Rock. What the camp rockers don’t expect is the opening of a slick, new musical camp (alas, only in a fantasy music would there be two music camps across the lake from each other) has drummed up some serious competition for Camp Rock.

Camp Star, the rival camp, threatens the future of Camp Rock’s existence. The only way to solve the differences between the two camps is with a live musical competition in which fans can vote for the best camp. Alright! With a storyline that could have come right out of the Mick and Judy book of movie musicals, Camp Rock 2: The Final Jam is fun and enjoyable for the entire family.

The success of this film comes from the skilled performances of the four leads. Lovato and the Jonas brothers have all spend hundreds of hours in front of TV cameras since the last Camp Rock movie and the experience has made all of them better actors. While Lovato has natural screen presence, it’s the brothers Jonas who are the most improved. Their performances in the earlier film were kind of wooden and forced, but the three brothers look much more at home when acting. Joe and Demi have some palpable chemistry in the romance department; I believe they were dating at the time. Kevin proves that he actually good at something besides being the backup singer. The eldest Jonas brother shows some comic flair in the movie, especially in his scenes with young campers.

While Camp Rock 2: The Final Jam is not great art, it is great pop entertainment. The musical numbers are all wonderfully choreographed and the songs are all catchy, with a variety of styles throughout. Don’t be surprised if you find yourself humming a couple of them soon after the credits have rolled.

Bonus features on the DVD include the extended version of the film that contains two exclusive music sequences and the “Rock Along” version of the movie, with puts the lyrics up on screen during the movie. The Blu-ray has additional featurettes, one that introduces the new stars in the film and another that has music videos. Disney continues to lead the competition with their Blue-ray/DVD/Digital Combo packs. By including all three formats in one package, Disney is catering to the needs of all of their fans. People who don’t have Blu-ray players yet won’t have to go out and purchase a new copy of the movie if/when they step into the high def era. I like that a lot. There’s nothing more annoying than owning a huge collection of movies and having to replace it as soon as you get the latest technical gadget.