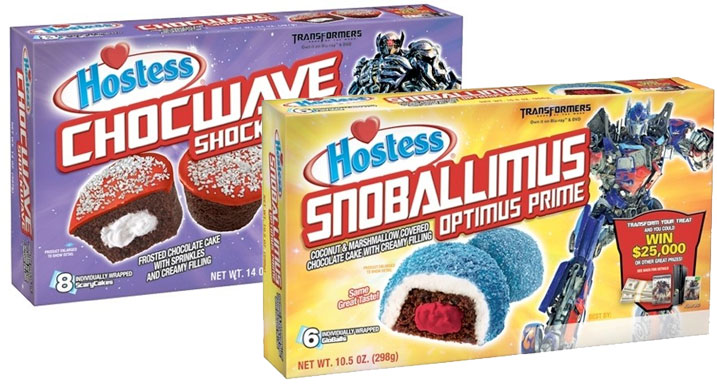 On its face, the idea that Hostess would team up with Paramount to promote the DVD/Blu-ray release of Transformers: Dark of the Moon might seem pretty silly. After all, snack cakes have nothing to do with sentient robots, and besides, if you’re going to put together a tie-in, doesn’t it make more sense to do it when the movie is actually in theaters?

But if you think about it, it makes perfect sense. I mean, the whole thing about Transformers is that they always have the element of surprise, because you never know when your boombox or friendly neighborhood semi truck is going to spring to life and save the universe or something. So surprise! Transformers Hostess cakes are here in two exciting, awkwardly titled flavors: Snoballimus Optimus Prime and Chocwave Shockwave.

“But wait,” you might be saying. “What do Transformers have to do with Hostess cakes?” Which is a perfectly valid question. But again, if you think about it, this makes perfect sense. The Transformers movies are directed by Michael Bay, and like Hostess cakes, they are bright, larded with artificial ingredients, and while they might seem like a fun idea if you’re in the right mood, they always leave you filled with shame and regret.

Obviously, the big draw here is the borderline offensively named Snoballimus Optimus Prime, which sounds like a Comic-Con sex act and looks like an aborted Smurf fetus. The truth, as it always is with Hostess’ shenanigans, is more mundane — the Snowballimus is really just a Snowball with different food coloring. Which means: Frosting, surrounded by chocolate cake, surrounded by marshmallow, topped with coconut. You’ve had them before; you know what I’m talking about. When I was in middle school, the Snowball was one of those irresistible Hostess snacks that popped upon 7-Eleven endcaps just rarely enough to make them seem like an exotic alternative to Twinkies, Cupcakes, and Ho-Hos — and, probably more importantly, rarely enough that the intense disappointment associated with eating them was mostly forgotten by the time I got around to stuffing my face again.

This story has a predictable conclusion. As a sugar-mad tween, I thought Snowballs were sort of gross; as a 37-year-old man, surprise! I think they’re sort of gross. But the insane visual appeal of these things is timeless — my kids eyed the Snoballimus box with confusion and wonder, their impressionable young DNA twitching at the thought of delicious frosting wrapped in fresh cake, sheathed in gooey marshmallow and crispy toasted coconut.

I didn’t have the heart to tell them it was all a lie. (I also didn’t have the heart to let them eat this shit, which makes me an awful tease, but whatever.) I’ve been willingly suckered by these Hostess tie-ins before, and I’ve long suspected that they use remaindered cakes for the campaigns. I mean, you don’t expect fresh-from-the-oven goodness out of a Hostess box, but the Snoballimus Optimus Primes that I ate were disturbingly dry — which, let me tell you, adds nothing to the experience of chewing on Hostess’ leathery marshmallow coating and coconut-flavored pencil shavings.

As for the frosting in the middle: it tastes red.

Far more successful is the Chocwave Shockwave, which you can make at home by baking cupcakes, leaving them out overnight, and then coating them with a mixture of red candle wax and sugar. Just kidding! Sort of. For the most part, this is a pretty standard Hostess cupcake — you have your kinda spongy, mostly sort of brickish cake, topped with a thick layer of that weird frosting with the texture of sweet paper. But it’s topped with sprinkles of crunchy, metallic sugar, which adds a lot more to the, uh, experience than I would have guessed. To me, Hostess Cupcakes were always sort of like the Rod Stewart of the convenience store snack cake world — you knew some talent had gone into them once upon a time, a lot of people seemed to like them, and you knew pretty much exactly what you were going to get every time you took a bite, but I only turned to them when nothing better was around.

Well, maybe it’s only because Snoballimus was around, but the Chocwave cakes tasted pretty good, at least in the admittedly rather dismal context of Hostess tie-ins for second sequels to movies inspired by toys. If you’re wandering the aisles of your local convenience store, craving a cheap, sweet snack that comes with a dusting of crunchy silver sugar, Chocwave Shockwave is the one to beat. Otherwise, just order something legitimately awesome from the bakery section at Foodzie. Your inner middle-school student may wonder when you turned into such a square, but your grown-up palate will thank you.