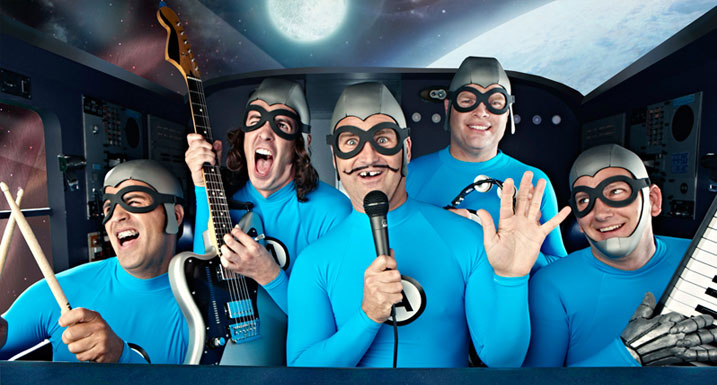 I started writing about music for money in 1987, when I was a dumb eighth grader who thought it was the height of rock-crit iconoclasm to write wordy four-star reviews of records by artists like Toto and Bruce Willis. Fortunately, I had an editor who bought into this madness, but that isn’t the point — the point is that some of my earliest writing was published just as CDs were becoming popular, and I wrote a lot of stuff about how awful CDs were (including an editorial titled — wait for it — “Compact Discontent”), but when the calendar turned to 1988, I did own one solitary, single compact disc. It was an album called New Monkees, by a band called New Monkees, which was created in conjunction with a short-lived television series titled New Monkees.

I’m bringing this up now because the New Monkees have been on my mind ever since I forced myself to sit through the first episode of The Aquabats! Super Show!, a triumph of goofball entertainment whose low-budget idiocy reminded me, again and again, of the manic, candy-colored foolishness I’d rush to tune in for every Saturday afternoon during the New Monkees‘ fleeting 13-week syndicated run. I loved it, but I was a 13-year-old boy, and thus a moron. The show was terrible.

The Aquabats! Super Show! is awful in similar ways, although I suspect the braintrust behind the show is doing it on purpose, which makes me feel funny inside: The creative team includes Yo Gabba Gabba! showrunners (and serial exclamation point abusers) Christian Jacobs and Scott Schultz, whose fondness for low-budget aesthetics and silly humor is used to far greater, more innocent effect on the latter series. Aquabats! employs a superficially similar conceit, with cheap costumes, minimal sets, and Ritalin-fueled editing, but I detected a layer of gross, winking irony here that isn’t as obvious with Gabba!

As my friend Will Harris pointed out in his enthusiastic review for the AV Club, Aquabats! is a clear spiritual descendant of the sort of wacky live-action lunacy that flourished briefly on Saturday morning television during the ’70s. The difference — and I think it’s a crucial one — is that those folks were actively trying to do cool, cutting-edge stuff, whereas Jacobs and Schultz are having a retro laugh that rings hollow.

For me, anyway. But as I said before, I thought the New Monkees were awesome when I was 13, and I’m sure I’d think the same of The Aquabats! Super Show! if I were 13 now. I’m simply not the target audience for this stuff. I wish it were more honest, and less deliberately evocative of such a chintzy era, and I also can’t pretend to understand why [old man rant] everything has to be so garish and loud and spliced up with so many quick cuts [/old man rant]. But every generation needs its stupid jokes, and as these things go, Aquabats! is utterly harmless. You may want to make sure it’s airing in a separate room, but it’s harmless.