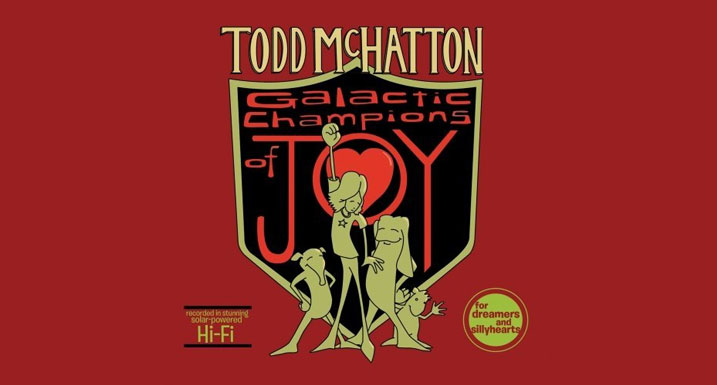 Every album title says something, but any artist who gives a record a dazzling name like Galactic Champions of Joy is really shouldering the weight of expectations. I mean, just say those words out loud: Galactic. Champions. Of. Joy. What does a collection of songs have to sound like in order to earn such an exciting, effervescent title?

Todd McHatton’s Galactic Champions of Joy is a wickedly addictive bouillabaisse of family-friendly kindie ‘tude and old-school pop geekery, rolled into fine layers and stacked into infinity. McHatton’s really wearing his influences on his sleeve here, from cockeyed songsmiths like Harry Nilsson and Shel Silverstein to whip-smart musos like Bill Frisell, and the result is a warm-n-fuzzy whirlwind of sound; this is basically the kindie equivalent of Jellyfish’s Spilt Milk, only without the insane budget and bleary-eyed studio bickering. Also, some of the songs are about animals.

If you love great pop music and you love your kids (not necessarily in that order), Galactic Champions of Joy is your must-own album of the fall — but if you need another reason to drop some of your hard-earned coin on McHatton’s music, how about this? If you buy the record this week, you’ll be supporting a worthy cause. I’ll let Todd give you the details:

I am overwhelmingly proud to announce that this Saturday, October 8th, I will be your guest DJ/Host on the perfectly amazing radio show Spare the Rock, Spoil the Child! It’s indie music for indie kids!

In celebration of this momentous occasion, starting tomorrow, and throughout the week until October 8th, we are donating 100% of the profits from all downloads of Todd McHatton / Galactic Champions of Joy to the Haitian People’s Support Project. This, in honor of Bill Childs’ beautiful Many Hands: Family Music for Haiti project. As of September, 2011, the Many Hands: Family Music for Haiti CD has raised over $35,000 for the Haitian People’s Support Project, providing drinking water for thousands and school tuition for kids in tent camps. We want to chip in a little bit more. YOU name the price, from $1 up to whatever you’d like to chip in. You get an album download of fun, joyful, music and you get to help some people that really need it.

Remember, to be a part of the Haiti benefit you must download Galactic of Champions of Joy HERE ONLY between October 3rd and October 8th, 2011!

Much thanks to Bill Childs at Spare the Rock, Spoil the Child…and thank YOU!