If you don’t feel like paying out the nose for LEGO sets — or maybe you’re boycotting them because of their kinda patronizing LEGO Friends lineup — but you still aren’t quite ready to take the plunge into “generic plastic blocks” territory, Playmobil would like to have a word with you.

As discussed in this recent article from Wired’s GeekDad, the venerable playset builder has lately redoubled its efforts to penetrate the some-assembly-required market, and the sets reviewed in the article — the modern art-sounding Pet Clinic and Barn with Silo — both look pretty cool, especially if you can trust your kids to clean up small parts and/or not eat fake silage. 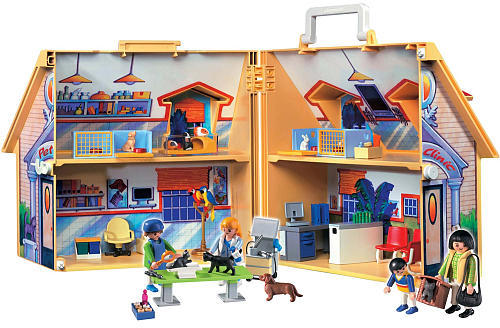 Speaking as the father of a would-be animal doctor, I’m intrigued by the Pet Clinic set, especially at the quite reasonable $39.99 quoted by GeekDad (although Amazon seems to have a different idea of what it should cost you). We don’t own any Playmobil around these parts — I actually don’t think I was aware that they were still making toys — but this looks like a happy medium between overpriced, overfranchised LEGO and cootie-bearing downmarket brands. Check out GeekDad’s in-depth writeup here and plan your impending birthday parties accordingly.

When I was a kid, a nerd dad was something to be…well, maybe not ashamed of necessarily, but certainly discussed as rarely as possible, and taken out in public for biannual viewings if you could help it. Dads were supposed to own heavy metal tools and teach you how to use them only after you begged and proved you weren’t actually an idiot, and take you camping, and make you walk the dog. They were only supposed to care about your toys for as long as it took to scream obscenities after accidentally stepping on them. Aside from the occasional Pinewood Derby debacle, they were not supposed to get involved in dorky hobbies.

What’s the Free Universal Construction Kit, you ask? Why, nothing more than “a matrix of nearly 80 adapter bricks that enable complete interoperability between ten popular children’s construction toys.” In other words, as Kottke put it, it’s a new invention that lets kids “connect their LEGO pieces to their Lincoln Logs to their K’Nex.” Which is pretty awesome, and certainly something I would have been interested in, but what’s really interesting is how you make it — by cranking the damn things out on a Makerbot 3D printer.

I ask you: What kind of dad has a 3D printer lying around the house? A nerd dad. And while I can’t say for sure that nerd dads outnumber the lawnmowing, nearly mute, Old Spice-scented dads of my youth, I think we’ve reached some sort of geek nirvana when using an $1800 open source printer to manufacture plastic widgets for interspecies toy mating is regarded as no big deal.

I’d write more, but my four-year-old son wants to play Egg Punch on my old iPad 1. Just watch this trailer and marvel at our brave new world.

The Free Universal Construction Kit from Adapterz on Vimeo.

In honor of today’s hotly anticipated Apple event, a small tribute to the iPad of my generation’s youth. Rest in peace, noble Speak & Spell! I’ll never forget you, or the many filthy things I’d make you say.