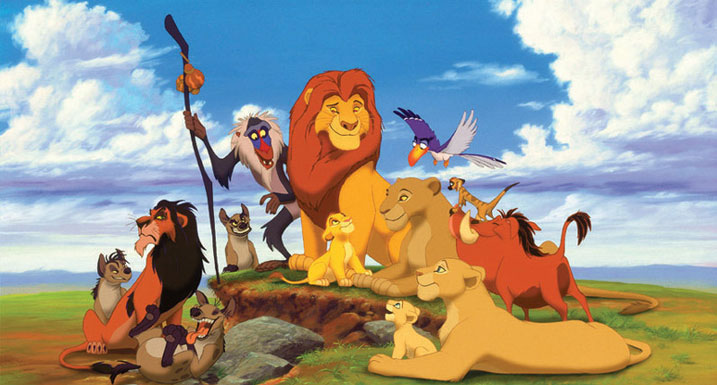 I don’t know about you, but for me, 1994 doesn’t feel like it was all that long ago — so seeing The Lion King roar back to theaters (where it’s been Number One for an impressive two weeks) and make its Blu-ray debut seems a little…premature somehow. But hey, that’s what happens as you get older: time speeds up, and you can’t help grading nostalgia cash-ins on a sliding scale.

No matter which scale you use, it’s hard not to give The Lion King an A. The last hurrah from the New Golden Era team that brought us Disney hits like The Little Mermaid, Beauty and the Beast, and Aladdin, it does everything Disney movies are supposed to: it tells a universal tale of loss and redemption, set against breathtaking animated vistas, using unforgettable characters and heart-tugging music. Nearly 20 years later, if someone says “Hakuna matata,” you’re going to think of Timon and Pumbaa. For a latter-day Disney film, that speaks volumes.

Of course, The Lion King has also been merchandised to death; in fact, it’s never really gone away, thanks to direct-to-video sequels, a long-running Broadway musical, and a TV spinoff, to name but a few of the many, many tie-ins. It’s always easy to be cynical about everything Disney does, but when they’re bringing back a movie that’s barely old enough to vote, that cynicism feels more appropriate.

Be that as it may, Disney has also earned a pretty incredible reputation for its Blu-ray reissues, and The Lion King is no exception. If, like me, you were a little worried that they might have lost their touch after plopping out the awful-looking Fox and the Hound reissue pack earlier this year, you can rest easy — The Lion King stands tall next to other spotless Blu-rays from the vaults.

The picture is appropriately incredible, rendered brilliantly via a 1080p AVC-encoded transfer that fills the screen with rich colors across the spectrum. You’ll have to drop it into slo-mo and squint to spot any imperfections, and why would you want to do that when you can just sit back and soak it all in? With the volume turned up, of course, so you can hear every bit of the huge, finely layered DTS-HD Master Audio 7.1 surround track.

When you’re finished revisiting the film, you’ll have heaping helpings of bonus features to dive into, both on the disc — which includes an audio commentary, a pair of new behind-the-scenes documentaries, deleted and alternate scenes, and interactive image galleries — and a streamable “virtual vault” containing nearly two hours of material held over from previous DVD releases. Like other Diamond Edition titles, The Lion King also comes with DVD and digital copy discs; unlike most others, this one bundles in a 3D Blu-ray disc, just in case you’ve gone crazy and sprung for a compatible TV and player.

At the moment, the whole thing will set you back $25 at Amazon, which probably seems like 25 too many if you already own the movie on DVD. But if it isn’t already part of your library, you know the drill — this is the version to own. Plan accordingly.