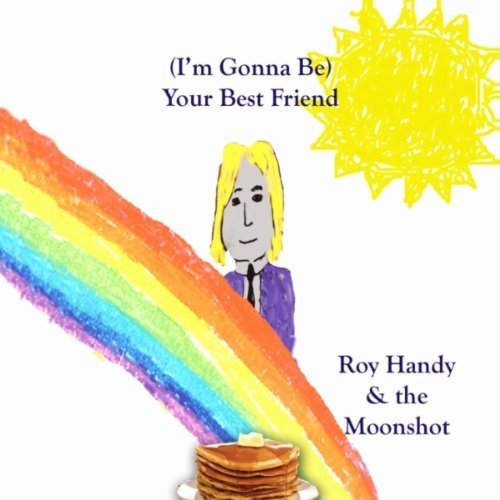 I had a high school English teacher who allowed us one exclamation point per semester. It struck me as an unusual rule at the time, but I’ve come to appreciate its wisdom, so song titles like “I Am a Dog!!!,” “That’s a Great Idea!!!,” and “Blanket!!!” — along with hand-drawn artwork that might make you wonder whether the CD duplication plant accidentally scanned the wrong side of the booklet — made me instantly suspicious of Roy Handy and the Moonshot’s debut album, the optimistically titled (I’m Gonna Be) Your Best Friend.

My trepidation didn’t last long, however, melting in the face of the album’s sunny blend of crunchy guitars, toe-tapping beats, catchy melodies, and funny lyrics. It’s definitely a homebrewed affair, but Roy Handy (otherwise known as Gerry Stanek) keeps things lo-fi without sounding amateurish. It’s an interesting sound for a kids’ record, and it puts the “indie” in “kindie” more than anything I’ve heard in quite awhile; it could function as sort of a gateway drug for the alt-rockers of tomorrow.

Best Friend does have its skippable moments, such as the irritating “Space Kitty!!!,” but on the whole, this is a fun, consistently entertaining record that works its way past your defenses with all the confidence of its title. It may not be your best friend, but you should definitely make its acquaintance.