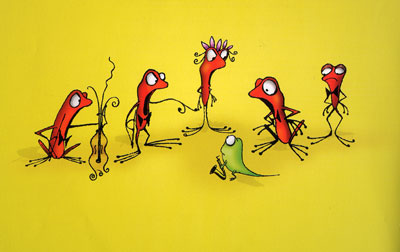 Cool picture, huh? It comes from a scene halfway through Philip Pelletier’s One Night in Frogtown, in which our hero, young Tad — that’s him there with the downcast look and the saxophone — is given a tongue-lashing (ha, ha, ha!) by a group of classical music-playing frogs who have no patience for Tad’s love of the blues. Of course, Tad’s already been cast out by the blues-playing frogs for not loving the blues enough — and his journey’s only halfway finished, because all the frogs in Frogtown are pretty stuck up about their favorite kind of music, and they take offense at Tad’s eclectic nature.

In case you hadn’t already guessed, One Night in Frogtown is a book about fitting in, and one that uses love of music (which can be a pretty divisive thing, especially when you’re young) to frame its message of friendship and cultural diversity. Children’s authors do this sort of thing all the time, but Frogtown has the added advantage of Lindner’s wonderful illustrations — and the CD that comes with the book, featuring music to go along with the songs each group of frogs sings (blues, classical, rap, etc.) as well as the tune Tad plays after he’s been exiled for the third time (a ballad titled, naturally, “Alone”). Blues veteran (and, like Pelletier and Lindner, Oregon resident) Curtis Salgado provides the narration.

After the book arrived, I did what I always do: Handed it to my three-year-old daughter and watched her reaction. She was immediately drawn in, to the point that the scene where Tad talks about feeling alone actually made her cry. (She still won’t listen to the song.) We read the book first without the CD, then tried to read along with the music — but getting a toddler to sit and look at one page of a book for three minutes while a song plays is impossible, and she lost interest pretty quickly.

Overall, One Night in Frogtown is a beautifully assembled multimedia package with a moral that any parent should be able to get behind and some perfectly entertaining music to go along with it — and a portion of the proceeds go to the Oregon Cultural Trust, to boot. As final proof, weeks after reading it for the first time, my daughter’s still talking about it; in fact, she just took it into preschool to share it. What else can you ask for in a kids’ book?