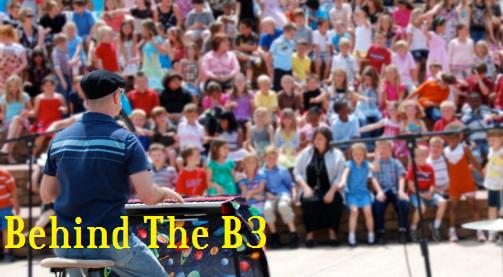 The Rock Star Dream: name in lights, stadiums packed with screaming fans, partying all night, making millions of dollars…  Awesome, right?!  So how does one end up going from that fantasy to playing shows in libraries and schools for kids and families?  Well I’ll tell you after I introduce myself.  My name is Boom! (I also answer to Wiser, Chris or DaddyDaddyDaddyDaddyDaddy) and I play organ and sing in the funky kindie duo Sugar Free Allstars out of Oklahoma City.  For those of you not familiar with kindie (indie music for kids) it is basically a sub-genre of children’s music that has become a whole movement of creating music that is enjoyable for kids and adults alike.  A phenomenon common to many kindie acts, SFA included, is that they started out playing for “grown ups” (often times in late night establishments) and have somehow found themselves performing kid-friendly music at family events, school assemblies and public libraries instead.

The first incarnation of Sugar Free Allstars came together in late 2000 and immediately began playing late-night club shows, releasing our first album in 2001.  Many times fans that had kiddos at home would come to shows after buying our albums and tell us how much their little ones liked the music.  It happened often enough that we started tossing around the idea of “one day” releasing a kid’s album.  But not yet, we were too busy living the dream…oh yeah, the Rock Star Dream…only the stadiums packed with screaming fans in reality were more like 10-15 people in a club at the end of the night.  Oh, and the millions of dollars turned out to be maybe $200, but after paying a bar tab and buying gas to get to the next town, more like $100 to split between everyone.  Par-ty!  And so it went, year after year, until late 2006 when Fate intervened. After performing at an all-ages community show, we were approached about playing a tour of Oklahoma City area libraries for their kid’s summer reading program.  We were excited to book the shows and quickly began recording our first kindie album Dos Ninos (released in 2007) in order to have merchandise with subject matter that was appropriate for kids. We were amazed as SFA began to receive attention nationally, seemingly having found our niche playing funky music for families.  Even more encouraging, the first song on the album went to #1 on XM Radio’s Kids Place Live channel. After the surprising success of that first release, the course of our careers was forever altered.

So there you have it – from bar band to Purveyors of Kindie Rock. The musician life is much more fulfilling now and even slightly more prosperous playing for families rather than in clubs. That being said, it is still a job, and a continuously demanding one at that. I do have an amazing, super supportive wife and incredible 2 year old son who encourage and motivate me to continue pursuing this path. My intent with this column is to provide a behind the scenes look at being a working kindie musician while also figuring out how to be the best PTSAHD (part-time stay at home dad) I can be: sharing the ups and downs, the frustrations and the triumphs, the disappointments and the successes along the way.  This will be your chance to get a glimpse of the reality of this kindie rock business, not just the big fun rock shows.  I’m looking forward to sharing my experiences with you from Behind the B3!